Decision given by Supreme Court of India in case of The Assistant Commissioner of State Tax & Others V/s M/s Commercial Steel Limited dated 03-09-2021 – Section 107 and Section 129 of CGST Act, 2017 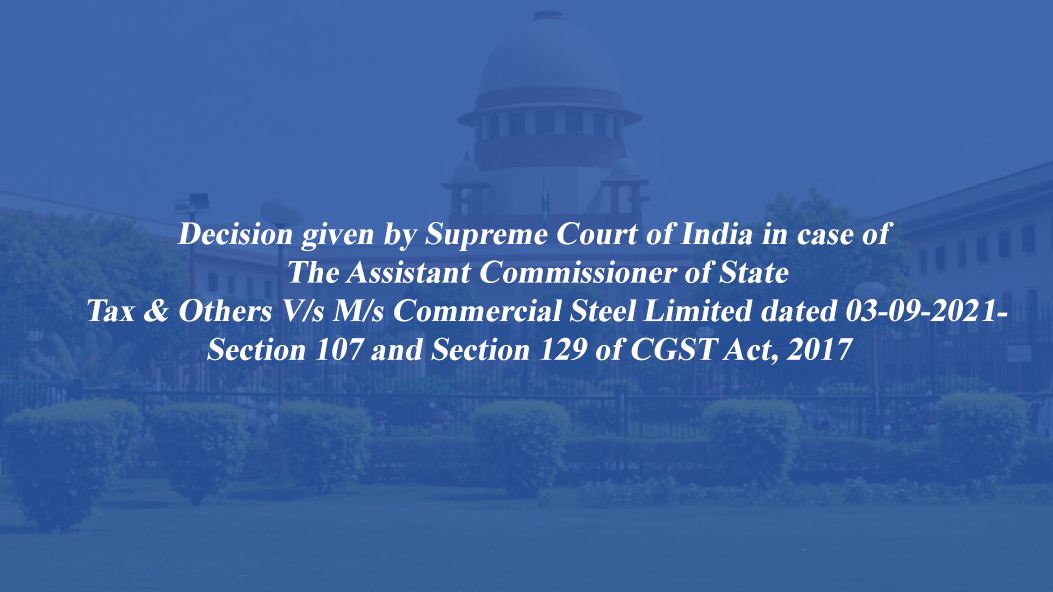 Decision given by Supreme Court of India in case of The Assistant Commissioner of State Tax & Others V/s M/s Commercial Steel Limited dated 03-09-2021 – Section 107 and Section 129 of CGST Act, 2017

Note : – Although the taxpayer did  not violate the Provisions Prescribed  in  the Act at the time of Preparation of Invoice or e-way bill, yet just on account of wrong route the tax payer has to go through the litigation Process starting from 12th December 2019 to 03rd September 2021. In fact, the tax payer is a scape goat between the tax distribution of Center and State Tax Department, the goods were detained considering the fact that there was evasion of CGST & SGST. However, the tax payer would have already charged IGST on the invoice generated followed by e-way bill. Further, in case of detention of goods, many writ petition is being filled before High Court and such Writ is being entertained by the High Court. The Process of filing the writ with High Court generally expedite the Process of Justice. Even if the Tax payer would avail the alternate remedy the Principal laid down by High Court for granting Justice to the tax payer will still follow. As it is rightly said that Justice Hurried is Justice buried and Justice delayed is Justice denied – unless the Proper mechanism of this aspect in GST is streamlined the tax payer will remain a Scape Goat because of the limitation of Law.

However, considering the decision given by Supreme Court on 03-09-2021 in case of  The Assistant Commissioner of State Tax V. M/s Commercial Steel Limited the GST department may prefer an appeal against the said decision of High Court.

Following Principle Emerged from the aforesaid decision given by Supreme Court: –

Decision : – No – The High Court cannot entertain Writ Petition except under exceptional circumstances where there is:

Decision : – Unless, there is material on record placed by the Department to prove that there was intention of evading the payment of tax by taking wrong route or as per the factual matrix of the case it can be proven that the wrong route was taken to evade the payment of tax, then, the goods can be detained by the Department and proceeding can be conducted under Section 129 or 130 of CGST Act, 2017.