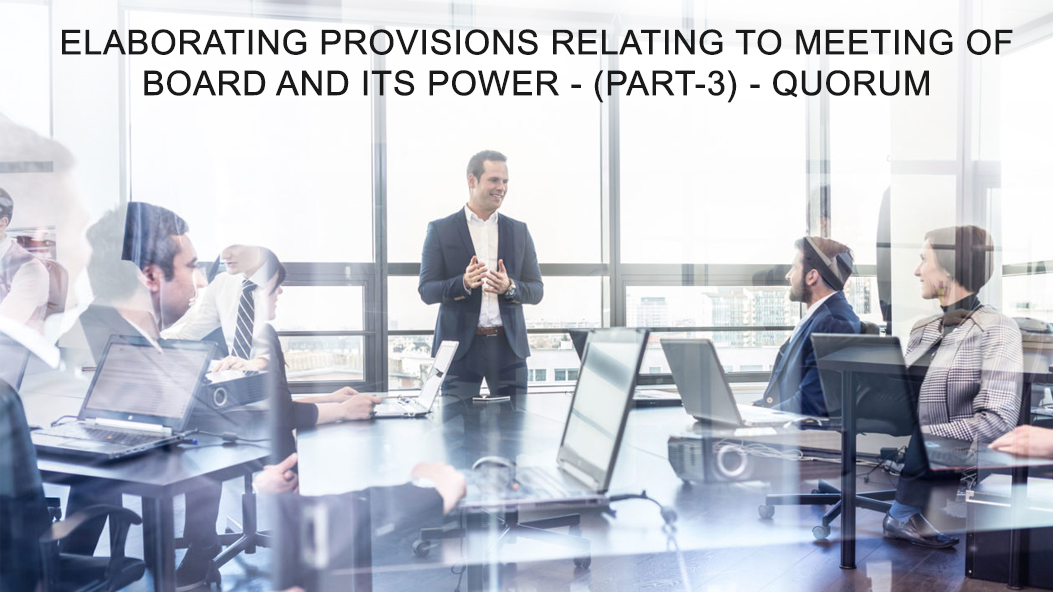 Introduction : Under companies act there are certain provisions which entity is required to comply by conducting minimum number of board meeting and by ensuring the required legal compliance. It is important to know that what are the number of meetings that entity is required to conducted, what will be the quorum of meeting, what are the power that are vested to board of directors; in this article we will cover all the provisions relating to meeting of board and its power.

In this part we will discuss requirement of quorum and question that may arise in relation to conduct of meeting and powers of board of directors.

Whether there is any requirement relating to minimum directors attending the meeting?

Yes. Under companies act, section 174 prescribes that one-third of its total strength or two directors, whichever is higher will be required as quorum. In case of any fraction number shall be rounded off as one. The minimum number of directors required for constitution of quorum shall be present throughout the meeting.

Whether article of association can prescribe for lower number of directors as quorum?

It shall be noted that article of association can prescribe for higher number of directors required for constitution of quorum but articles of a company cannot specify a quorum which is less that prescribed by law.

Illustration : Desai & Co. has 12 directors on board. There is vacancy of 4 directors. The company has conducted it meeting on 4th April, 2021; How much directors are required to be present to constitute quorum.

It shall be noted that meeting will be considered as valid meeting only in case where the meeting is conducted with quorum. For calculation of quorum following formula is to be used; one-third of its total strength or two directors, whichever is higher. Total director on board does not include director whose place is vacant. Therefore, 4 directors will be required to constitute quorum (i.e., 1/3rd of 12 i.e., 4 or 2 whichever is higher). The four directors will be required to be present throughout the meeting.

What if article of association provides that minimum 5 directors will be required for constitution of quorum?

Further it is important to note that if company is section 8 company that is company constituted as non-profit organization than quorum will be 8 directors or 25% of total strength of directors whichever is lower. Provided that quorum shall not be less than two members.

The said relation is provided to company only in case where Section 8 company has not committed a default in filing its financial statements or Annual Return as required under companies act.

Whether participation through electronic means to be counted for Quorum?

As per provisions the directors who participate by video conferencing or other audio-visual means will be counted for the purpose of determining the quorum at the meeting.

Whether there is any exemption to One person company (OPC)?

The provisions relating to quorum are not applicable to One Person Company (OPC) which has only one director on its Board.

How quorum is to be decided in case business which is to be transacted has interested directors?

Firstly, to resolve this query we are required to understand, what do we consider as Interested Director. Interested director means a person who is directly or indirectly interested in contract or arrangement to be entered with company where such person is i) Director or ii) Promoter, Manager, Chief Executive Officer or iii)holds more than 2% shareholding of that either on his own account or jointly with others. In case contract or arrangement to be entered with firm where such person is partner or is person is owner of entity (Proprietor).

Illustration: Hari & Co. has 14 directors on board, in meeting of board of directors’ company is going to discuss about contract in which 4 directors are interested, 3 directors were not present at meeting.

How many directors will be required for constitution of quorum?

Quorum for valid conduct of meeting will be 1/3rd of total number of directors or 2 whichever is higher. In case of fraction, it shall be rounded upwards. Therefore, quorum for meeting will be 5 directors. Further, as per the provision interested directors will not be allowed to participate and therefore, will not be considered for quorum required to discuss contract in which director is interested. In that case quorum is non-interested directors which shall be not less than two. Here both the quorum has been fulfilled therefor meeting will be considered as valid meeting.

However, there is one exception which has been provided that if company is private company and has not defaulted in filling annual return or financial statement as required under companies act, then interested director will be allowed for participation of meeting but will not be considered for quorum.

What if required quorum is not present?

In case if required quorum is not present than in that case it will be considered that meeting is not held validly. The said meeting will be automatically adjourned to same day at the same time and place in the next week or if that day is a national holiday, till the next succeeding day, which is not a national holiday, at the same time and place.