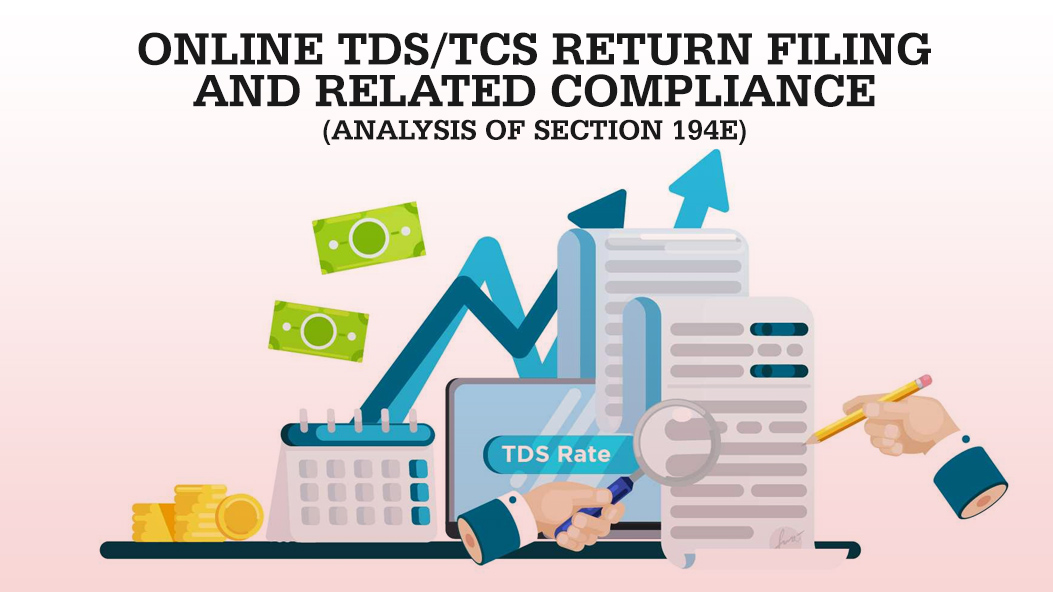 Introduction: In era where technology as substantially replaced the usage of man-power; our portal provides service where on the basis of raw data our experts will ensure all the TDS and TCS compliance including filling of returns. In this article we will analyze section 194E of Income Tax Act, 1961 along with relevant illustration.

Which are the persons that are required to deduct TDS under section 194E?

In case if any person who is

he is receiving income by way of participation in India in any game (other than a game the winnings wherefrom are taxable under section 115BBA) or sport; or advertisement; or contribution of articles relating to any game or sport in India in newspapers, magazines or journals; than in that case TDS will be deducted at the rate of 20% on amount paid.

in this case also TDS will be deducted at the rate of 20% on amount paid.

or in case if person who is an entertainer, and

than in this case TDS will be deducted at the rate of 20% of income received or receivable from his performance.

Whether the person whose TDS is deducted under section 194E will be liable to file return?

In case if person whose TDS is deducted under section 194E will not be liable to file return of income in case if both the conditions are simultaneously fulfilled.

Which form is to be furnished as TDS return?

If person has deducted TDS under section 194E, then such person will be liable to furnish Form 27Q. Such form is to be furnished by deductor on quarterly basis.

What is the threshold limit and rate of deduction?

As per section 194E TDS is required to be deducted irrespective of quantum of amount.

Important Points to be Noted:

Whether person will have option to go for normal taxation scheme?

No. Person will not have option to go for normal taxation for income specified under section 115BBA as such provision is to be mandatorily applicable.

Can assessee reduce the rate of taxation?

Under section 194E it has been provided that applicable rate of tax will be 20%, it shall be noted that assessee cannot apply to assessing officer for no TDS or TDS at lower rate under Section 197 by filling form-13.

What will be time when TDS is required to be deducted?

TDS will be required to be deducted at time of payment or crediting account of payee in books of payer whichever is earlier.

What if such amount is credited to suspense account?

In case even if amount is credited to suspense account or account of any name, then in that case it is considered as credited to account of payee and TDS will be required to be deducted at time of such credit.

Illustrations : Mr. R has is an Indian resident non-citizen; as he is playing in football team; during the year he has received Rs. 2,00,000/- in financial year 2020-21 from one the American agencies in respect of matches played in USA. Whether such American Agency will be liable to deduct TDS? How Income will be taxed in hand of Mr. R.

It shall be noted that provision of deduction of TDS is applicable to any person; but applicability of Income Tax Act, 1961; is restricted to India therefore, such American agency will not be liable to deduct TDS.

Further if the person is resident than in that case his global income is taxable in India; further as per section 115BBA (Special rate of tax) is applicable only to Non-resident being Non-citizen; therefore; Mr. R will be liable to tax in respect of such income at normal rate; where he can avail the basic exemption limit and no tax will be paid in this as the amount is less than basis exemption limit.

What if Mr. R was Non-resident?

What if Mr. R is Non-resident and Income is received in India but he wants Income to be taxed at normal rate?

Section 115BBA is mandatorily to be followed; if person is falling under the preview of said section than in that case it is to be mandatorily followed by him; Mr. R will not have option to taxed such income at normal rate.

What if the Mr. R was a referee of the match and not the player?

In said case it is we established position of law that section 115BBA will not be applicable as it applicable only to any person other than sports man. Therefore, such income will be taxed as if it is normal income.

This are all the questions relating to section 194E which may arise to assessee.