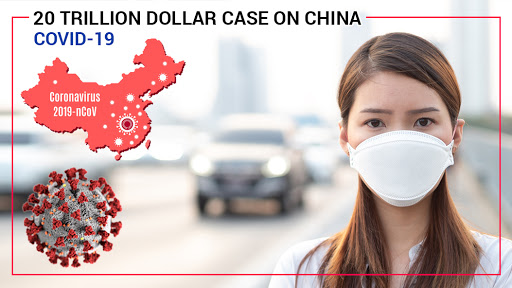 It is a known fact to many that US has filed case against china for the alleged outbreak of Covid-19 in US and amount of claim is 20 trillion US dollars. Fun facts is China’s GDP as on 2019 was 14.3$ trillion US dollars. So technically, US has claimed whole china from China.

Now the question is how this this litigation works. Let us look into certain facts

What is the Exact Claim?

The claim is of 20 trillion US dollars on China. US claims that covid-19 has been created and released by China and the Government of China along with the Military arm and Wuhan Institute of Virology is involved in this conspiracy. Covid-19 has been termed as “Biological Weapon” of China because China has entered into various treaties with many countries, that consider the release of any Biological weapon (recklessly or otherwise) as “Terror Attack.” Hence release of COVID-19 from Wuhan Institute of Virology is also considered as “terror act” intentionally done to kill the mass population of US.

US, in its Law suit has depicted various event and news which might prove their claim correct. The Law suit combines the legal aspect with the Prevailing facts and circumstances, depicting the event and the connection between Chinese government with military and military arm connection with Wuhan Institute of Virology from where the COvid-19 is said to have been leaked. Let us look into the detailed facts.

China in November 1984 joined the Biological Weapon Convention as a member of treaty. As per the said treaty China has legally agreed that the manufacture, stockpiling, or deployment of Biological Weapon are illegal and therefore any activity of such nature on the part of China is also illegal.

Initially on November 17, 2019, a new military weapon variation of coronavirus was noticed in Wuhan city, in central China’s Hubei province, although reporting from government records makes it unclear if it was recognized so early as a new disease.

Fact known to everyone but not in details – Journey  of Dr Li Discussing about Covid-19 in Public: –

Connection between the Chinese Government and Military Arm.

The Law suit specifically claim that: –

“COVID-19 was designed by China to be a very “effective” and catastrophic biological warfare weapon to kill mass populations.”

terror attack from the US to china | biological war | covid weapon