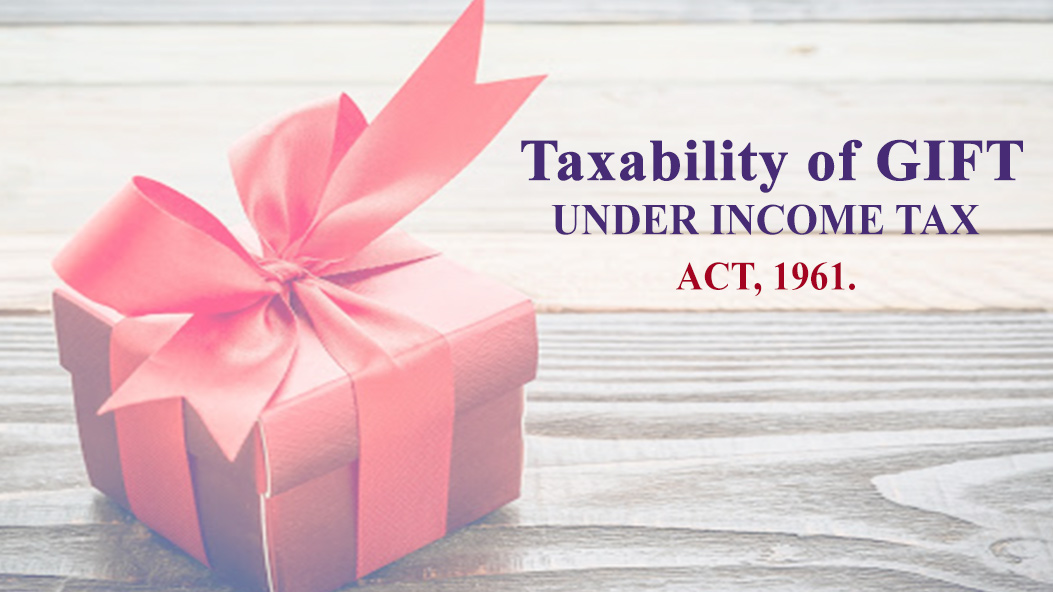 Introduction : Whenever any movable or immovable property is given in form of gift the first question arises in mind of receiver is taxability of such gift under Income Tax Act, 1961; There are certain exemption which are provided to assessee in respect of gift received by him and there is also specific monetary limit stated by government for any financial year. Therefore, lets analysis provision specified by the government in this regard:

Provision relating to taxability of Gifts:

*Movable Property has been defined as any property in the nature of Shares and securities, Jewellery, archaeological collections, drawings, paintings, sculptures, any work of art, or bullion. Therefore, if there is any other movable property such as Car, Watch, etc. then it will not be taxable.

Exemptions which are available to assessee

Illustrations: Mr. X has received wrist watch from his employer the value of such watch is Rs. 20,000/-. Whether such will be taxable in hands of Mr. X? If yes, under which head of income?

Illustrations: Mr. R has received share from his friend the fair market value of such is Rs. 30,000/-. Whether shares will be taxable in hands of Mr. R? If yes, under which head of income?

In the given case, shares fall under the definition of movable property and therefore in case of no consideration and if amount of fair market value of such shares exceeds Rs. 50,000/- then it will be taxable under the head Income from Other Sources. The value in question is not exceeding the limit, therefore no tax liability will arise in hands of Mr. R.

In the given case irrespective of amount and nature of relationship if any Gift has been received by the assessee on occasion of marriage then in such case he will be covered under the exemption and no taxability on such gift will arise. However, if such gifts are received in occasion of birthday it will be taxable.

Illustration: Mr. Desai has created a private discretionary trust for his child and the said trust has received an amount of Rs 50,00,000/- in form of gift from the beneficiary’s Aunty (Sister of Mother of Beneficiary) – Is it taxable?

In the given case only trust which are registered under section 12AA/12AB is covered under the exemption i.e. any gift received by said registered trust will be exempted; however, the said exemption does not cover private discretionary trust. Due to this, the said transaction will fall under general provisions and in that case any gift received in cash and the amount exceeds Rs. 50,000/- then the said will be taxable because trust is separate legal entity and it’s provision of gift received from relative is applicable only to individual and HUF. In such case Rs. 50,00,000/- will be treated as taxable income in hands of trust.

Instead of such transfer from the beneficiary’s Aunty it is advisable that she shall transfer amount directly to child’s account as this will fall under the definition of relative and the said transaction will be treated as exempt transaction.

Illustration: Mr. X has received Rs 50,00,000/-as gift in cash, in XYZ HUFfrom Trust registered under Section 12A/12AA/12AB. Whether such will be taxable in hands of XYZ HUF? Whether the said transaction will be treated as taxable if Mr. Xis a trustee in such trust – Is it Taxable?

If gift is received by HUF from any of the trust registered under section 12AA/12AB then in that case said transaction will be covered under exemption and such will not be taxable in hands of HUF; However for trust it will not be treated as application of income as only expenditure incurred by registered trust on specified charitable objects as per object clause in trust deed will be allowed as application of income. The trust cash balance will be wiped-off from their accounts and XYZ HUF cash balance will increase.

Further in case two i.e. where Mr. X member of HUF is also trustee of said trust. In such case also the taxability of the above transaction will be same as case one.